As an American citizen, do you always retain your rights as they are laid out in the U.S Constitution? Read on to find out. 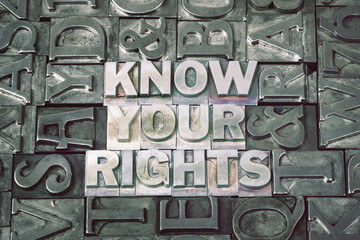 As the old saying goes, there are three instances in which your rights as an American citizen no longer apply: in prison, public school, and the U.S Military. In fact, after being convicted of a felony, you must undergo a restoration process in order to regain the rights you had prior to your conviction. This process is called “clemency”, and it can vary based on the severity of the crime committed. Clemency also differs on a state and federal level. Therefore, it is true that you “lose your rights” as an American citizen in some situations.

Do I Lose ALL My Rights in Prison?

When you are sentenced to serving time in a prison facility, you surrender quite a few of your civil rights. However, you still retain the right to due process by law. Also, the Eighth Amendment to the Constitution protects you from being subjected to cruel and unusual punishment. Interestingly enough, “due process” does not require any government oversight. In fact, it is often left to the discretion of prison officials. As long as prison officials are not in direct violation of the Constitution, judicial bodies typically do not get involved.

What About Public School?

It may seem odd that public school students (and in some cases, teachers) lose certain rights once they enter a school building, but it is partially true. In the case of public schools, the First Amendment and its applicability is often debated. The First Amendment to the Constitution lends the right of freedom of speech to all Americans. That being the said, censorship is still heavily practiced in public schools. Students and teachers are not free to say whatever they want, whenever they want. In fact, neither are teachers. Teaching certain material (like “banned books” or other non-approved teaching materials, for example) can result in the loss of a job for an education professional. Likewise, a student wearing a t-shirt with a curse word or other inflammatory statement on it could result in that student’s suspension. Although these cases seem to be of minimal importance and even seem sensible in some ways, they technically result in the temporary loss of an individual’s American Civil Rights.

U.S service personnel’s rights have been widely debated throughout the years. Some believe that service members should be fully entitled to their Constitutional Rights. Others assert that becoming a service member automatically surrenders an individual’s rights to the branch of the U.S Military in which they serve. So, what does the law say? Although service members have rights, there is clearly a stigma attached to a service member prematurely (or “dishonorably”) exiting their military service. Therefore, a legal quandary occurs. If one were to desert or abandon their military service without proper permission then they would be subject to harsh punishment which, in a way, is a perceived loss of that individual’s rights. An individual cannot simply “quit” any position in any branch of the U.S Military, which is not the case with other (even service-based) jobs.

If you have any questions regarding your rights as an American citizen, contact us at Taylor & Hinkle for professional legal consultation.
Get A Consultation